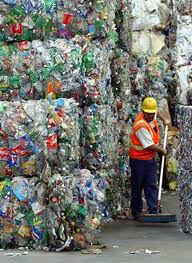 "Only 7 percent of plastic waste in the United States is recycled each year,

according to the Environmental Protection Agency.
A startup company in Niagara Falls says it can increase that amount and reduce the country's dependence on foreign oil at the same time.

It all starts with a machine known as the Plastic-Eating Monster.
Thousands of pounds of shredded milk jugs, water bottles and grocery bags tumble into a large tank, where they're melted together and vaporized.
This waste comes from landfills and dumps from all over the United States.
John Bordynuik, who heads his namesake company, JBI Inc.has
invented a process that converts plastic into oil by rearranging its hydrocarbon chains.
According to tests by the New York Department of Environmental Conservation, JBI's patented technology is efficient, with close to 90 percent of plastics coming out as fuel. Bordynuik says that makes the case for this kind of recycling to go mainstream.
Each barrel of oil costs about $10 to produce.
Because there's no lack of waste-plastic supply, and no lack of demand for oil, Maxted says the technology has the potential to transform both industries."

Part of the "all of the above" strategy we keep hearing about? You bet!